Ok, aside from my mate Erin (who also logs into my Netflix account), who else is watching OITNB?

The image for the show kept coming up on my Netflix and after finishing Breaking Bad and Nurse Jackie (don’t judge) I thought I would give it a go and hand on heart, am now obsessed!

According to Wikipedia, which is all things true, the show is based on Piper Kerman’s memoir entitled “Orange Is the New Black: My Year in a Women’s Prison” (which I now wish I had read prior to said obsession).  The series is based around a New York waspish women, sentenced to 15 months for carrying cash for her drug smuggler girlfriend (girlfriend at the time, he is now about to marry that guy from American Pie) and follows her through what one may assume, general prison life with loads of colourful characters giving insight into how they deal with their time there.  There are flashbacks to key parts showing life pre-prison and ultimately how they ended up there. 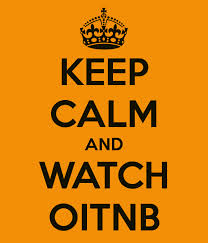 I won’t give anymore away but if you are looking for a new series to watch and have Netflix you really need to get involved. I wonder if I can throw a OITNB themed party…..