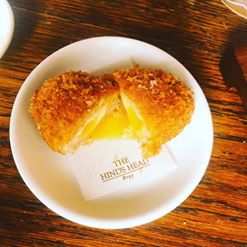 Yesterday I had lunch with my family for my birthday at The Hinds Head in Bray. I actually thought I was booking The Crown which I have been to before but because I am quite moron like, I got the names mixed up and we ended up at The Hinds Head!

The Hinds Head is located in one of the prettiest parts of England I think.  Bray is about a ten minute drive from the centre of Windsor and is on a three-mile stretch of the very picturesque Thames.  Owned by Heston Blumenthal, The Hinds Head is a Michelin starred pub who earned its star in 2012 along with a variety of other accolades.

The pub was built-in the 15th century and it has such a warm, welcoming feeling when you go inside (think roaring fires and leather chairs) and if you manage to see the low ceilings in time before you crack your head, you know you are about to be in for a treat.

Our booking was for 1.45 pm and the pub was relatively quite. We were offered a selection of tables and choose one right by the window.  We were so lucky with the weather yesterday and the sun was streaming through the windows, it was gorgeous.

In terms of size, the menu is quite small which I like.  There was an offering of 6 or 7 starters and mains, along with steaks and a handful of snacks which we choose to have as starters. I can’t do a starter and a main anymore. Am getting fatter as I get older and although I would love to, I just can’t have 2 courses.  The snacks however were a good alternative and between us, we had one of each to share. My mother-in-law said the Devils on horseback were the best she had eaten and I went for the scotch egg. The picture below pretty much sums it up. It was amazing!

For mains, I had something I would never ever usually choose.. I had the ham and leek pie which was outstanding. It wasn’t huge and i was grateful and it came served with new potatoes and was honestly, just perfect. The pasty was gorgeous, the chicken tender and well-balanced with bacon and leek.  My husband had the bone in sirloin of veal which he also said was the best he had ever had and ma and pa both had the Cotswold white chicken breast with lettuce, bacon and broad-beans which they both enjoyed!

We didn’t have pudding but were brought out a lovely cake for my birthday which we all shared. We had 2 beers, 2 glasses of champagne and a bottle of Chilean Sauvignon Blanc and all in all, our bill came to £214.00 which I don’t think bad at all for a lovely lunch.

I will definitely  go back and would highly recommend for a special occasion. We were well looked after by the team and the whole day was perfect. 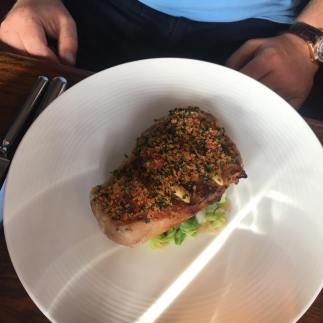